In order to understand cryptocurrency wallets, it helps to know a little bit about public key cryptography, which is a system designed to send data in a secure way that can be authenticated. In any public key encryption system, a large and random number is generated, and, using algorithms, that number generates both a private and a public key. The keys used for cryptocurrency accounts are numbers too large to be used, so they are converted into Wallet Import Format (WIF) and each key becomes a series of letters and numbers.

Example of a private key in WIF format XJqHSSipAcsgBRJbN2oTQNrN5A36vgQfZyrUDCEfLHaezQAFSU6w

In an example transaction, if Babe-oon wants to send me bitcoin, I give Babe-oon my public key. Babe-oon initiates the transfer which names me as the new owner of that bitcoin. It’s actually naming my private key as the owner, and it’s not actual coins that are being transferred but information about what private key owns how much. This is done using public keys encrypted to private keys. That’s basically what the bitcoin blockchain is – an ongoing ledger of who owns how many coins. It’s a continuing record of transfers of ownership. Each transfer is encrypted and lumped into a block of other transfers. When the block is decrypted, it becomes linked to the block before it, and this is how the chain of blocks forms. The link from block to block is a hash of new and old information, and this continuous cryptic hashing of information increases the security of the chain. Also, anybody can download a copy of the blockchain, which makes it hard to corrupt because there are copies on many computers around the world.

With the almost omnipotent computing powers used for decryption these days, should you be worried someone will hack your private key? If we’re talking about bitcoin and its contemporaries (ether, litecoin, etc.), the answer is no. In order for a program to be able to guess a bitcoin private key, it would have to be set to guess a number between one and 1077. In order to guess a number between one and one trillion, which is only 1012, it would take more than the time the universe has existed, and the computing process would need to consume more energy than Earth is capable of producing. 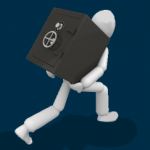 Even though thieves can’t effectively guess your private key, they can make malware designed to steal it. They try to do this when people store or transmit private keys online. You may even have such malware on your computer right now. If someone gets your private key, they can send themselves all your cryptocurrencies. This is why some people turn to “cold storage”, which means storing your private keys and related data in a device that isn’t connected to the internet. Hot wallets, then, are storage programs connected to the internet. 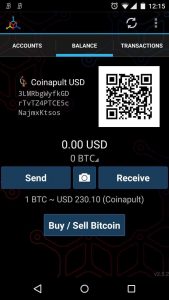 Cryptocurrency wallets are programs that store private and public keys. A cryptocurrency wallet isn’t storing the currency; it’s storing the data that points to the transactions on the blockchain which are related to your private key. It’s a way of storing your keys and accounting for your balances. You should get a wallet set up before you acquire cryptocurrency. If you buy it from an exchange, you can store it there, but there are risks to that.

Online wallets are stored on the cloud. They are easy for you to access, and some of the online cryptocurrency wallet providers have interfaces which are user-friendly. For noobs, dealing with cryptocurrencies can be confusing, and these online services can make it easier. Many of them have encryption processes to safeguard your information, but these software wallets are still more vulnerable to hackers than cold storage options.

Desktop wallets are stored on the hard drive of your computer, 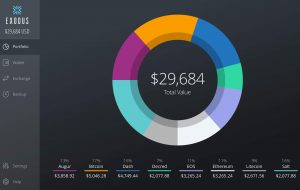 and they are only accessible from that computer. Because of this, they are safer from hackers than online wallets, but if something happens to your computer, say it gets a virus, you could lose access to your keys, which means losing all your bling.

Mobile wallets are similar to desktop wallets except they run on your phone. Their mobility makes them practical because you can take them with you and use them in stores and in transactions with people you meet. They’re often user-friendly and come with helpful features such as QR scanners. Mobile phone networks, however, are not secure, and if you rely solely on a mobile device for cryptocurrency storage you could lose it all if something bad happens to your phone.

There are many different types of hardware wallets. They’re generally considered more secure than software wallets but not as easy to use for transactions. At the time this article was written, there had been no reported thefts of cryptocurrencies from a hardware wallet. Most hardware wallets keep private keys in a separate location within the device so that the keys are protected from viruses and other attacks. Hardware wallets are often programmed to prohibit dissemination of the private keys in plain text. In other words, your private key would be in your hardware wallet, but you wouldn’t be able to see it, and neither would anybody else. You don’t need to see it; you just need to have it. 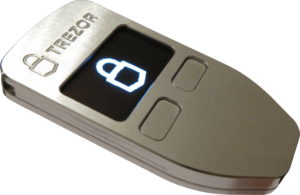 Hardware wallets can be sticks, cards, fobs, or mini-computers. They are a storage device with extra functionality. In this article, we won’t go into detail about the different brands and types of hardware wallets. There is plenty of information on the web. What you should do, though, is first figure out which features are important to you. Do you plan to sit on your cryptocoins for a long time? If so, ease of transaction features may not be important to you. You might even want to make a paper wallet, which is described below.

If you buy a hardware wallet, it’s advisable to buy directly from the manufacturer. Many people buy from third party retailers such as Amazon, but any middle step in the buying process is an opportunity for scammers to take advantage of you. Also, you ought to go with a manufacturer with a strong reputation. Currently, some trustworthy hardware wallet sellers are Keepkey, Trezor, and Ledger, but there are more.

This is a good option for people who like tinkering with geeky things. If you want to know more about Raspberry Pi in general, here’s a video. It’s like a minimized version of a desktop computer. You plug in a monitor, mouse, keyboard, and power cord. The operating system is on an SD card, and there are people who have made attachments that allow your Raspberry Pi to function as a hardware wallet. There are tutorials online to help you set up this system.

Not as simple as they sound, paper wallets are one of the most secure ways of storing your cryptocurrencies. Setting up a paper wallet requires a bit of tinkering. It’s a document with your private and public keys on it, usually displayed in both WIF and QR code format. 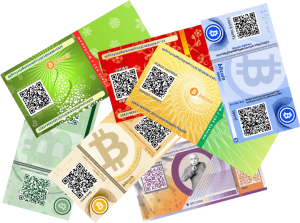 You can password protect your paper wallets, make duplicates, and store them in separate, secure locations. That way if someone lugs away your two ton home safe with a megadrone, you can take the copy of the wallet that was stored in the safe, and move your funds while the thief is realizing that he may as well use the password-protected piece of paper he stole to wipe his thieving arse. When you want to perform a transaction with your cryptocurrency, you can scan the QR codes into one of the other types of wallets described above. Paper wallets are best suited for storing coins that you want to sit on for a while. For an example of how to make a paper wallet, click here.